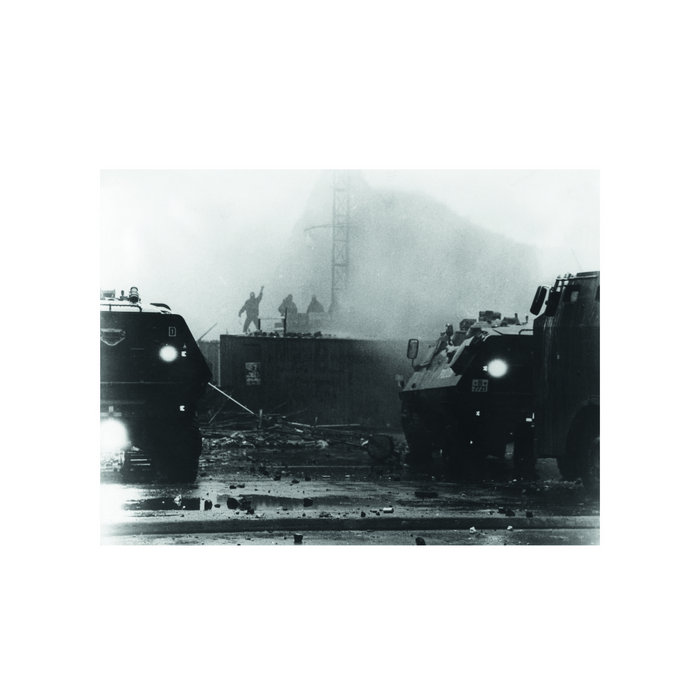 Re-release of the album which MARC WEISER (RECHENZENTRUM, zeitkratzer) and JÜRGEN HENDLMEIER (producer for THE FLAMING SIDEBURNS, THEE ULTRA BIMBOOS) created as ARURMUKHA. With the use of soundbites, field recordings, and stylistically diverse tracks, they reprocess the eviction of 13 squats on Mainzer Straße in Berlin-Friedrichshain in November 1990, forming it into an acoustic scenography in the style of the "Maifestspiele" by EINSTÜRZENDE NEUBAUTEN.

14.11.2020 marks the 30th anniversary of the clearing of 13 squats on Mainzer Straße in Berlin-Friedrichshain. The violent confrontation between the police and about 500 squatters, involving armored vehicles, helicopters, and 10 water cannons, was the biggest police operation in Berlin's post-war history, with 4000 officers deployed, and is deemed to be the last big "battle" of left-wing squatters in Germany. The insert for the LP provides a detailed chronicle of the events (taken from the book "Berlin Mainzer Straße: Wohnen ist wichtiger als das Gesetz [Berlin Mainzer Straße: Housing is more important than the law]", published in 1992 by Basis-Druck).

On the occasion of the anniversary, the Berlin label KARLRECORDS is making a contemporary document that has been out of print for more than 25 years available to the public again. The album "14.11.90" by internationally renowned electronic musician and co-founder of the CTM Festival MARC WEISER (RECHENZENTRUM, zeitkratzer a.o.) and JÜRGEN HENDLMEIER (producer for THE FLAMING SIDEBURNS, THEE ULTRA BIMBOOS a.o.) was originally released in 1993 as a vehicle for them to work through their personal experiences as contemporary witnesses of the eviction, on the label GOLDRAUSCH-TONTRÄGER, which was founded for the release. The project's name, ARURMUKHA – "avaricious demons", is a term from Vedic mythology, here alluding to the capitalist logic of exploitation guiding the West German corporations that bought out the former GDR after reunification.

Shunning the popular clichés of squatters, the duo processes original recordings of the clearing action, as well as material from radio and tv as their musical-textural starting points, composing them into a densely packed acoustic psychogram, recounting the events of the time with dramaturgic skill, in chronological sequence over the course of the two sides of the vinyl. Armed with a sampler as their main instrument they create an acoustic scenography which, as a sonification of memory, pits itself against oblivion. While constructed as a soundtrack, the heterogeneity of its styles gives the album the character of a compilation, aggregating drones, industrial, electronics, post punk, outsider music and political texts into an imaginary meta music film of resistance. The subject matter and music may suggest comparisons with EINSTÜRZENDE NEUBAUTEN's piece "Maifestspiele". The covers of the original edition at the time were individually designed by many different friends of the scene in the form of a "social sculpture" of the squatters' movement and comprised screen prints, collages, graphics, and photos. Selected for the re-edition of the LP: a picture by the Berlin photographer HARALD HAUSWALD, who is considered one of the most famous photo-chroniclers of the GDR and who also provided a collection of hand prints for the original.

Despite its age, the album is an alarmingly relevant one, with its contents not having lost any of their urgency. Especially in view of the displacement of affordable housing and free cultural spaces in metropolitan cities, "14.11.90" is a plea for creative resistance culture with the hope for change in the existing conditions.