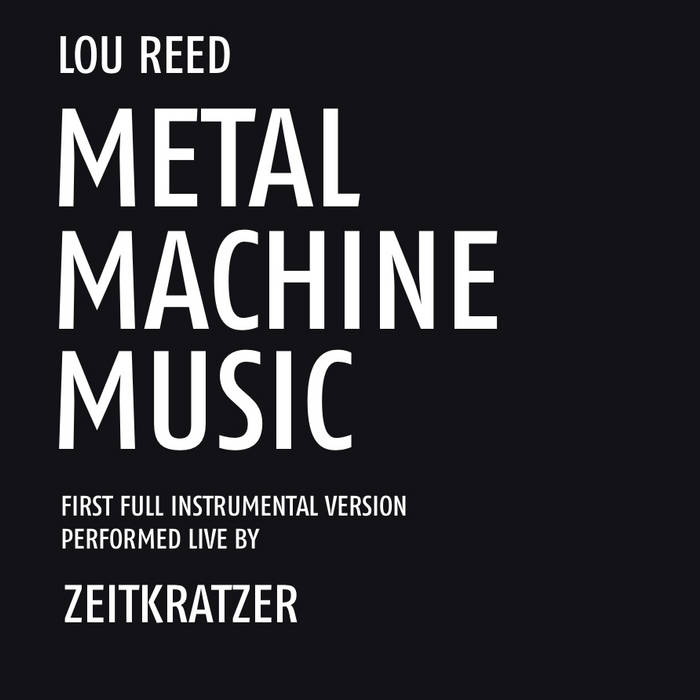 About 10 years after their first, critically acclaimed performances of Lou Reed’s adventurous album, zeitkratzer presents an audacious new interpretation of this 20th century avant-garde classic. Here, for the first time ever, all four parts of Metal Machine Music played by zeitkratzer on one recording! Seriously "clangorous"!

This new version of Metal Machine Music is even more transparent, instrumentally pure and radical than the shortened 2007 release; Live recordings from concerts in Rome and Reggio Emilia, Italy, mixed and mastered by Rashad Becker. A real sound experience!

After their first performances in 2002 (documented on the 2007 CD release on Asphodel) zeitkratzer gave Reed’s album a new thorough listen and transcribed the sounds to create an acoustic score for the ensemble to play live. Those familiar with the oft-criticized two-disc album might wonder how they pulled this off, but they did and their interpretation of the work brought it to the attention of a wider audience. It is therefore partly thanks to the zeitkratzer version that Lou Reed’s Metal Machine Music has been rediscovered as a classic of the Twentieth Century. It was at the live performance with zeitkratzer in Berlin, that Lou Reed spoke for the first time in public about the musical details of his composition, in an interview with Diedrich Diedrichsen.

zeitkratzer was clearly ready for the challenges of performing Metal Machine Music live, and drew packed houses for their presentation of the work. This confirmed their assertion that rock’n’roll as serious contemporary music has been ignored for too long, in too arrogant a way. The relentless sound forces the mind to put aside its preconceptions about what music is supposed to sound like, or feel like, or look like. The brain starts to implode, or explode, or dissolve Zen-like into the controlled chaos of the performance, discovering a strange exhilaration, accepting an invitation to explore the outer reaches of texture and timbre, to experience a sonic freedom that’s rare in any art form.

Metal Machine Music has become even more intense and worked out during the ten years of zeitkratzer playing it live at numerous international festivals – contemporary music festivals, noise festivals, improvisation festivals, - it’s impossible to limit this music to one genre. Metal Machine Music has gained a new quality of clarity, sound transparence and musical intensity. Real radical contemporary chamber noise music! These recordings from the Festival Romaeuropa in Rome and the Festival Aperto in Reggio Emilia (2012) present zeitkratzer not only at their very best, the splendid mix by Rashad Becker also reveals new aspects of this 20th century avant-garde classic!

Zeitkratzer have ‘got’ the internal dynamics of MMM, and truly understand that the deceptive monotony of the piece conceals moments of beauty and almighty clangour. It’s a staggering feat, feeling very much like a final unveiling of the depths hidden in one of popular culture’s more misunderstood by-ways. Uncut


Zeitkratzer’s arrangement enriches my appreciation of Metal Machine Music as a whole. The spirit of the music, as well as its general sense of shape structure, is rendered so well it gives you a deeper understanding of what the layers of sound in the original are doing, and how the interplay between the competing bits of noise adds up to something that exceeds the sum of its parts. Pitchfork.com